Fixed income has always been in Malaysia, a market dominated by institutional players. Now, why do people, corporations, and the governments issue bonds? These people issue bonds because they want to raise capital. Like the IPO or the Share Market, they also want to raise funds for capital expenditure or expansion.

In fact, the government is almost the biggest issuer of bonds – I’m sure you’re all quite aware of all the news about Malaysia borrowing a lot through the bond market.

Shares are on issue. If you buy a share, you have ownership in the company. On the other hand, a bond is actually a debt. It is a loan meaning you are lending money to the company. It’s a debtor-creditor relationship, not a shareholder relationship.

There are a number of key characteristics that identifies a bond. A share, for example, is defined by the company’s ordinary share, RM1 face-value, and so on. Bonds, however, are instruments customized according to how they want to borrow money. But, there are some general characteristics.

The definition of a bond is “Obligation.” It is a debt against future amounts on specified future dates. Certain bonds may be secure. That means they are attached to a form of collateral. For example, a bond will be secure against a property. In the case of the DanaInfra bond issued recently, it is secured by the government. If the DanaInfra goes bust, the government of Malaysia will guarantee the bond.

One characteristic is “Face Value.” Face value is, obviously, upfront. In the Bursa Exchange Traded Market the minimum is RM1,000. That’s different from shares. With shares you talk about a lot – a thousand shares – and it depends on the share price. In bonds we talk about the actual face values. We don’t have concept of one share as opposed to one bond. That is face value.

Then we have “Yield.” Yield is a very, very important concept when it comes to bonds. For example, in shares you would have things like P/E Ratio to decide a share is worth buying. In bond, the equivalent is yield. You have to look at yield when deciding whether to buy a bond or not. Yield is fundamental to deciding on buying or selling a bond.

There are a couple of characteristics which are specific to Sukuk – which are bonds, instruments, issued under Shariah compliant principles.

Malaysia is actually the biggest Sukuk market in the world, and we are the fourth largest bond market in Asia. So, our bond market is actually quite huge relative to GDP and is quite well-established in the sense that the definitions, the market practice, the bigger framework and stuff like that are very well established in Malaysia. In fact, we have a lot of foreign companies issuing bonds in Malaysian Ringgit.

Of course, when it comes to religion there are many different interpretations of how it should be. So, there are certain differences in the points of view in Malaysia compared to the Middle East, etc. One of the important things when it comes to Sukuk is harmonization. If you talk about the DanaInfra Sukuk that was issued recently, it is issued to the Malaysian standards of Shariah rulings, which is completely fine in this market.

For Premium Webinar Members, you can watch the full session about Bond and Sukuk market here: 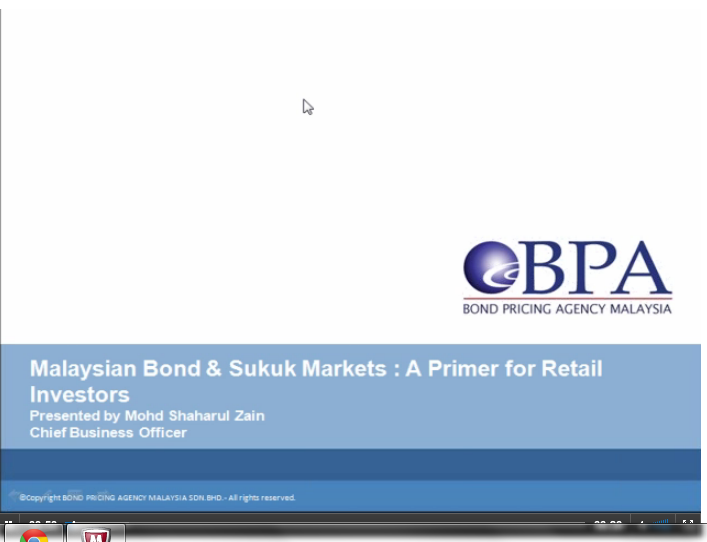