QE first became a known term during the early 2000s when Japan announced that it would attempt to use QE to fight off potential deflation. It became most well known during the global recession started by the financial crisis in the United States during 2008. Now the European Central Bank has recently announced that it will also attempt to use QE to combat slow GDP growth and potential deflation within the European Union. The process of QE is significant and the effects of QE have long lasting consequences. 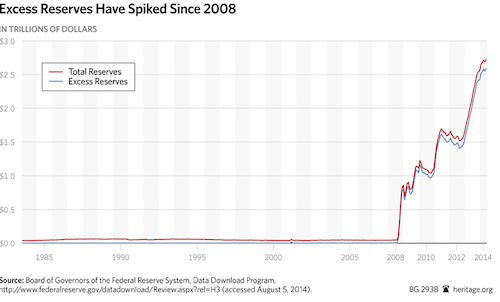 The execution of Quantitative Easing is rather simple in nature, but the exact mechanisms that cause change are complex and often times difficult to notice. QE is used exclusively by advanced developed economies such as Japan, the United States and the European Union.

Developed economies face unique challenges such as slow growth and deflation. Economies that are developed have trouble finding new industries to grow. Their financial markets become bloated and have difficulty finding new investment opportunities. This can lead to deflation, also known as a general drop in the price of goods and services. This is deadly for an economy.

Contrary to popular belief, inflation isn’t always a bad thing. If inflation can be controlled and kept at a minimal rate it is actually healthy for an economy. The problem that QE attempts to solve is when interest rates drop so low that they cannot be lowered any further.

Once the interest rate reaches the minimum rate allowed and the economy is still not growing, new wealth isn’t being created. QE is used as a final attempt to stimulate the economy, to create wealth, to inflate currency and to give an incentive to private banks to lend more money.

A common monetary policy that is similar to QE is when Central Banks buy short-term government bonds in an attempt to artificially lower short-term interest rates. QE is different in the sense that Central Banks instead buy long-term financial assets, such as treasury notes or other financial assets, directly from private banking institutions. The effect is similar but the process is different.

In order to facilitate the process of QE, Central Banks must artificially create new money and use it to purchase financial assets from private banks regardless of the interest rate or risk of the asset. The purpose of this practice is to give an incentive to private banks to lend more money, thus increasing the amount of liquid assets in the economy. At the same time QE also reduces long-term interest rates to ensure that inflation targets are met.

Quantitative Easing is always used as a last ditched effort to combat slow growth and deflation. If a Central Bank decides to use QE on any level, you should be worried. QE has only been used a few times and the success rate of this practice is still unknown.

In the case of Japan, QE was unsuccessful. In the case of the United States, the general consensus is that QE was moderately effective but did not achieve all of the intended goals. As an investor, you really must ask yourself “If QE fails, then what?”

The only successful example of QE happened in the United States. This example affected investors in a number of ways. One of the most important things of note is that toxic mortgage back securities were purchased from many financial institutions and given to the Federal Reserve (the Central Bank of the US). This took a lot of the volatility and risk out of the market.

The other important thing of note is that this inflated the US dollar to a significant extent. The interest rate on government bonds was extremely low, less than the rate of inflation. Although these bonds are considered to be very low risk, some investors technically lost money because the rate of inflation outpaced the interest rate on the bond.

Inflation is an important aspect of investing. It affects just about every part of an economy. Some industries benefit from a devalued currency. Generally speaking, inflation can improve imports and exports. It can also make stocks seem more desirable to foreign investors. But what investors must understand is that QE, and the inflation that follows, is not always a signal that a recovery is on the horizon. All investors must understand the purposes and consequences of QE.

The Europe Union has not recovered very well from the global financial trouble of 2008. Recently Mario Draghi, the President of the European Central Bank (ECB), has announced a massive QE program for the EU. Contrary to popular belief, this may not be a good sign of things to come.

Deflation is on the horizon for the EU, and this is a last attempt to fix things before they become unsustainable. The Euro (EUR) is at a 10 year low relative to the USD. This round of QE will inflate the EUR even more, to the extent that the USD may become more valuable relative to the EUR.

Another thing to take into consideration is why the EU has decided to start QE so late. In that case of the United States QE program, much of it was designed to reduce risk in the market. The EU doesn’t share this problem. They are attempting to spur growth and stop deflation. But if there is no room to grow in the EU, will Quantitative Easing actually help? Many experts believe that this is not a solution to the EU’s problems. Starting QE this late is a sign of desperation by the ECB.

Recently stock markets across the globe, in particular the US, have reacted to this news quite negatively. What would you do as an investor? Well, we can never predict what’s happening in the future. The best way to invest is to find valuable assets, providing decent income at bargain price. Then you shouldn’t be worried much about the market condition.

« Previous Post How a Broke Geek Settle his Debt and still Own the latest Apple Products Next Post » 7 Simple Steps To A Financially Fitter You, And Care For Overall Health