The long term MAS price chart shows that it has dropped from Rm 2.10 in 2007 to 18 sens today. As a long term serious investor, I have had a closer look at the cheap share price. Why is it selling at 18 sen or less than one fifth of its par value. 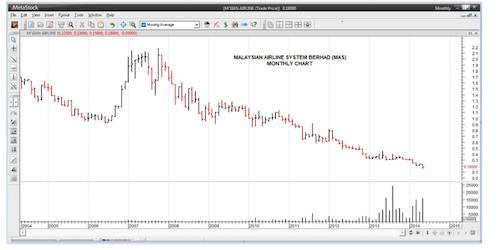 My intention in writing this piece is to help the BN Government decide to put in the final nail and to bury MAS so as to save tax payers’ money. Obviously the Government did not pay enough attention to my previous articles “Why MAS share price is on cheap sale?” and “Why MAS Is Still Flying” which I published about a year ago.

It is beyond logic as to why the Government wants to continue to use tax payers money to support MAS As usual, there are the incorrigibly optimistic cheerleaders for the airline who are unable to see the writing on the wall. These ‘experts’ – including the fat cat management of MAS – are still touting that the company is in recovery mode and will soon be returning to profitability. The market however sees the prospects for the airline differently.

Should the government continue to bail out MAS?

With the most recent losses, the total losses of MAS is now more than $4 billion. In any normal business, any company incurring large and sustained losses would have closed down or gone into bankruptcy. This has not happened to MAS yet but I think the time is right – in fact, long overdue – for the government to withdraw the open cheque book extended to MAS.

When planning the future of MAS, it is important that the government avoids not only the past mistakes but also takes a rational approach based on economic fundamentals. One line of simplistic thinking is that there is a bright and profitable future for MAS since the number of air travelers continues to increase by about 5-7 percent per year.

But if you look at the history of airline industry profitability, this is not the case for airlines worldwide. The fact is the airline industry requires huge capital and produces poor returns on capital employed. Hence, year after year, many airlines produce poor profit margins or outright losses.

Why is it that an industry with year-on-year rises in sales cannot generate good returns to shareholders?

If, say, an airline route between two destinations is found to be reasonably profitable it is not long before new entrants move in or current airlines simply move their planes to this profitable route. It is truly an industry governed by the principle of “survival of the fittest” and there is no doubt that Air Asia is much fitter than MAS.

The next logical question to ask is why doesn’t the Malaysian government allow MAS to fold up or go under?

There are two main reasons: Firstly, the perennial optimism of managers and shareholders. “Just one more chunk of money will see us break through into profitability as we rout the opposition!” seems to be the credo of these parties based on their self interest and not national interest.

Secondly, there is government interference because of the Bumiputra factor. The BN government refuses to let MAS go because of the NEP and the fear that the retrenched employees who are mainly Malay will kick up a fuss or change their support from the BN to the Pakatan.

Some may say that the government’s policy makes sense politically but it is poor economics.

Close down MAS without further interference or delay is the only way forward in the national interest especially since the permanent stain left by MH 370.

This article is contributed by Koon Yew Yin.

« Previous Post Malaysians Laugh and Cry Over Proton’s new Chairman, Dr Mahathir Next Post » A letter to all KCLau.com Readers