What can you do with RM50 Million? Sure, there are many things can be done with RM50 million. However philanthropist Mr Koon Yew Yin decided to give away his RM50 Million for a good cause – donation to build student hostels in Penang. 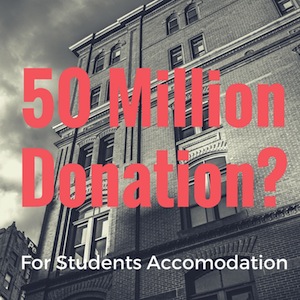 His proposal for donation has been successful and accepted by the Penang State EXCO in their recent meeting. Mr Koon Yew Yin wishes by building these hostels, will help to ease the burden of students studying in Penang, especially students from poor families, in their access to tertiary education.

The planning of the project has just kicked off, and designing is in progress by his architect. The student accommodation is planned to offer an affordable rental rate, therefore subsequent profit from the rental and other income can be used for maintaining or building hostels and other associated buildings for the use of students studying in Penang.

These facilities are open to all students whether they are local Penang, residing in other states or brilliant international students, an effort to draw the best talent from a globalized world.

In order to ensure transparency in managing the sum, Koon Yew Yin specifically requested that all construction contracts exceeding RM10,000 must be open to competitive tenders. A task force will be established to take full charge of the donation programme and the implementation of the hostels.

The task force is to be composed of 7 members; 4 members to be nominated by the Penang State Government and including the Chief Minister as Chair, and 3 members to be nominated by him or his nominee. Mr Koon Yew Yin himself will act as Adviser to the Task Force and his role must be spelled out and agreeable to him. This position will be a life long one, therefore any change to be made to this position has to be sanctioned by him or by the executors of his estate.

The State Government will be responsible for the following:
a) provision of state land for the hostels and associated facilities necessary for sports, parking, etc.
b) recruiting and defraying the costs of a team of professional staff to run and manage the hostels on a commercial basis.

This program has ensured that the rental rate must be competitive and profitable but at the same time must not burden the student residents. Koon Yew Yin and his estate reserve the right to authorize the state government to use a portion of the net income to establish a Koon Yew Yin Charitable Foundation to help poor students through loan scholarships to study in Penang.

To honour his donation, a tablet prominently displayed in the hostel complex with the following words inscribed:

The entire complex of student hostels is to be named Koon Yew Yin Residential Complex. Each hostel in the complex is to be named after the fundamental rights of citizens such as Liberty, Justice, Equality, Fraternity, Freedom, Integrity, etc.

The Penang Government has allocated a piece of land with an area of 60,000 sq ft situated directly opposite USM which has a student population of 18,000 students.

USM hostel only accommodates the 1st year students in  the land, zoned for high rise flats up to 36 storey high.

To ensure the success of this project his wife, Dr. Lim Teck Ghee, and Architect Lee Thean Hock have been appointed as his representatives in the management committee.

To date, Mr Koon Yew Yin has given out 300 scholarships since 8 years ago, and he intends to donate all of his remaining assets to charity helping the poor students. His term with his receiving scholars is to replicate his effort by helping poor students once they are financially solvent without having to repay the scholarship.

Mr Koon Yew Yin hopes that his endeavor will be infectious and the habits of helping the poor will catch on. He believes deeply that the recipient of his scholarships will carry on helping the poor students and his followers who have benefitted from his share investment advice will be inspired to do so.

“All my wealth is from share investment “- Koon Yew Yin

Of course, it is hard to give away the hard earned money, but eventually  charity helps us find happiness and meaning in our lives. We will also be happy to help the poor gain their happiness. Sometimes, it is not always about money, even a kind word can make a difference.