This is the story of a boy born in a middle class who started investing with a few thousand dollars and become the world’s richest investor still living today. Imagine getting more than US$500 million MONTHLY passive income! This is Warren Buffett. 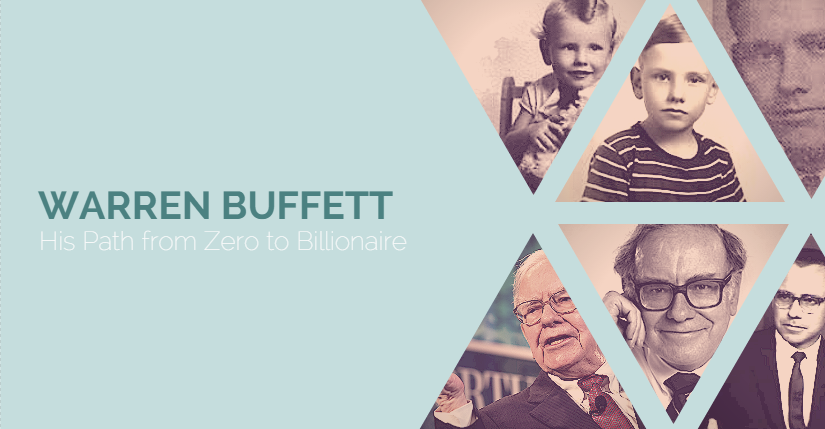 – 99% of his wealth was earned after his 50th birthday. That’s the wonder of compound interest!

– Buffett owns relatively few stocks. But those he owns, he tries to hold on “forever”. His holding company Berkshire Hathaway consists of stocks from less than 50 companies, including Coca-cola, Wells Fargo, American Express, Johnson & Johnson and Walmart. I just named a few businesses that have earned my money.

– Although he is the richest investor on earth now, he did his fair share of mistakes. Check out his investment in Dexter Shoe Inc and Tesco.

– He has donated more than US$37.4 billion to charities, a lot more than the amount some politicians managed to syphon off.

– Buffett hired a man who paid US$5.25 million just to have lunch with him. That man is Ted Weschler who manages a portion of Berkshire Hathaway’s investment since Sept 2011.

Here is the summarised full story:

Warren Edward Buffett was born on August 30th, in the year of 1930 in Omaha, Nebraska, USA who is famously known to be one of the greatest philanthropists for his pledge to donate 99% of his wealth via the Gates Foundation. Not only he is one of the wealthiest people of the world but is also a named by the Times magazine as one of the world’s most influential people in 2012. His net worth currently stands as $64.7 Billion (according to Forbes).

Born and raised in Omaha, Buffett graduated from Woodrow Wilson High School in 1947 and from the University of Nebraska from 1950 obtaining a bachelor in science degree. Even at an early age, he had a keen aptitude for stock brokerage as his father was a stockbroker and also a congressman of the United States of America. He has been known by his friends and acquaintance as a math prodigy, as he was able to calculate a huge number of sums in a swift time. He helped in his father’s stock brokerage by chalking the stock prices on the board.

Furthermore, at the age of 11, he made his first investment when he bought three shares of Cities Service Preferred at $38 per share. When the stocks plummeted to $27, Buffett remained patient and sold them later at a small profit for $40. He later regretted his decision when the Cities Service Preferred shot to $200 per share, making him learn his first lesson of his life which is to always be patient when investing.

Inspired by the book of famous economist and investor, Benjamin Graham, called “The Intelligent Investor”, Buffett aspired to work under him and thus enrolled himself in Columbia University and graduating in the Master of Science in business in 1951 where he developed a close relationship with his professor. After his graduation, for 3 years he sold securities for Buffett-Falk & Company. He later worked under his guru, Graham, at Graham-Newman Corporation for the next 2 years.

At the age of 25, from 1956 to 1959, Buffett worked at Buffett Partner Limited with a starting capital base of $100,000 in his hometown Omaha, which he had formed using the techniques that he had acquired from Graham and became a millionaire. It was commenced as a family investment partnership.

In 1959 he dissolved this firm to concentrate on the development of the Berkshire Hathaway, a textile company in New Bedford, Massachusetts, paving his path to be one of the most successful billionaires. He changed the structure of the company, by changing the company’s financial framework. He advised to keep its textile business, even under the huge pressure, but also used the company as a holding company for other investments.

When the market collapsed in 1973-1974, Berkshire gained the golden opportunity to shine again. Buffett went on a series of bargaining and buying various companies that included The Washington Post. From an unprofitable company of share price of $16, the Berkshire Hathaway rose to $200,000 a share in 2016. He also phased out the textile by also buying GEICO and Exxon (oil).

Berkshire had invested in Coca-Cola greatly and thus Buffett was made the director of the company from 1989 until 2006. He had also been in The Citigroup Global Markets Holdings, Gillette Company, and Graham Holdings Company. Moreover, the company also has shareholdings in Wal-Mart, Proctor & Gamble., IBM., American Express, Costco and General Motors.

Now, Warren Buffett stands as the 3rd Billionaire of the World and 2nd Billionaire in the USA. His unique style in investing with the mix of patience and discipline earned himself the name of the Oracle or the Sage of Omaha. Not only so, his style had defeated the markets of many. Buffet has also performed his role as a financier and facilitator of major transactions and helped out companies in distress which now stands as one of the successful ones. He had provided a loan to Mars Inc. that resulted in $680 million profit. Wells and Fargo’s shares are now 6.75 times higher than it’s 2009, at which time Berkshire Hathaway bought the share of almost 120 million.

Recently, Buffett has built the Kraft Heinz Food Company by teaming up with 3G Capital to amalgamate with H. Heinz Company and Kraft Foods. It now stands as the third largest food and beverage Company in North America. It also has revenue of a gigantic $28 billion.

One of his many famous quotes includes “If, when making a stock investment, you’re not considering holding it at least ten years, don’t waste more than ten minutes considering it.”

His advice to the young aspiring generation out there is to first invest in themselves before investing in others and always to be kind in their action and words. It is highly important to know your strengths and weaknesses and breaking the bad habits. More importantly, it is highly important to protect your clock and learn the essence of time management as it helps you keep a track of your agenda.

He also stated, “You only get one mind and one body. And it’s got to last a lifetime. Now, it’s very easy to let them ride for many years. But if you don’t take care of that mind and that body, they’ll be a wreck forty years later, just like the car would be.”

Now you know more about this investment giant, how about yourself? Do you want to know:
– How real wealth is built in the stock market and the business world?
– How to spot stocks that grow in value?
– How to calculate and estimate the intrinsic value of a stock?
We’ve designed a training program for you here: Bursa Method.