Practically all my wealth is from share investment and I have been trying to teach people how to invest by giving investment talks and publishing articles. My method of selecting shares is based on my entrepreneurship and not purely on accounting principles as I am not an accountant. That is how I bought so much of VS Industry and Latitude Tree. As a result, I become a substantial shareholder of these two companies.

The price chart shows that Latitude has gone up from RM 1.00 to above RM 6.00 in less than 24 months and VS has gone up from Rm 2.50 in January 2015 to the current price level of Rm 4.20 in less than 6 months. Basing on my business instinct, I believe the prices of these two stocks should go higher when the next quarter results are announced.

What is the most important lesson?

You must frequently look at company announcements and when you see any company showing a sudden jump in profit, find out more about the company. Look at their website and its profit growth prospect. That is how I discovered Latitude and VS. I also bought Lii Hen and Poh Huat when I saw their sudden jump in profit.

Similarly I bought into Supermax a few years ago. When I saw there was a sudden jump in profit for Supermax in February 2009, I started my buying. When I saw X ray detectors installed at the airport to prevent the spread of the deadly HINI virus, I bought more aggressively.

The chart below shows the price of Supermax shooting up from RM 1.00 to above RM 6.00 within a period of 15 months. People were then fearful of the deadly HINI virus. The demand of gloves far exceeded the supply. As a result, all glove manufacturers were reporting increasing profit every quarter.

How did I make a kill?

I told him that as soon as I saw the annual report as announced in February 2009 that there was a sudden jump in profit, I started my buying and when I saw X ray detectors at the airport, I bought even more aggressively.

In July 2010 when the HINI fever was under control, I sold just as aggressively. That is how I made such a huge profit.

Statistics show that almost all short term traders lose money. I have told you how and when to buy and now I will tell you when to sell to make profit. After you have bought, you must hold and sell only when you see the company reporting reduced profit over 2 consecutive quarters.

You must also sell when the criteria for you to buy is no longer valid. For example, although Coastal Contracts and Favco are still showing good quarterly profit, the demand for offshore vessels and cranes is severely affected due to the slump in the oil prices as shown on the oil price chart below. I sold all my Favco shares a few months ago when I saw oil prices started falling.

I hope this lesson is useful to all investors. Now what you need is some luck and wait patiently to see your profit grow. 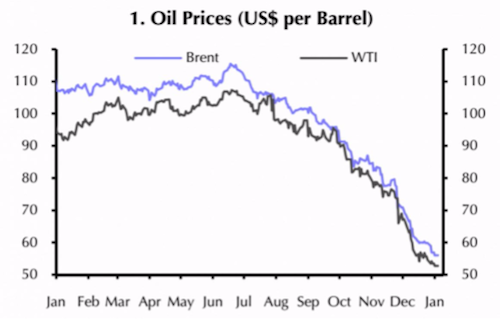 I trust this article is an important and useful lesson to all the readers. 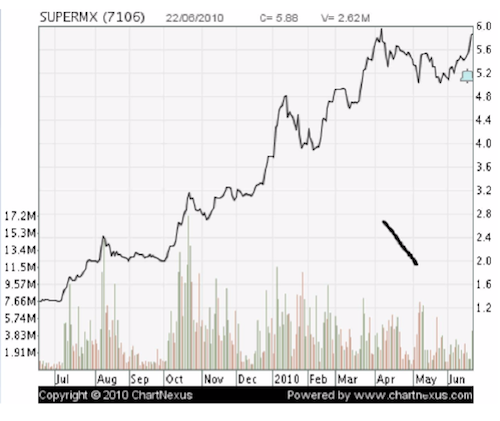 This article was written by Koon Yew Yin.

guestblogger
« Previous Post How A Personal Loan Can Wreck Your Life? Next Post » Will A Complete Overhaul Save MAS This Time?

1 Response to "The Secret Of Accumulating Wealth Through Share Market: An Important Investment lesson"