The statistic presented here is taken from Great Eastern Velocity Report for the period from January till March 2007. Before I start to highlight some important points to you, let’s read an insurance joke. (I don’t mean to offense anyone, it is just a joke)

Mr. John Mumford III, a rich old man was dying from a rare disease. On his deathbed, he called for his insurance agent, doctor and preacher: “I trusted each you my entire life. Now I want to give each of you $30,000 cash in an envelope to put in my grave. I want to take it with me.”

Mr. Mumford died and at the funeral, each one placed the envelope on top of the man, then he was laid to rest. On the way from the funeral, in the limo, the doctor confessed “I must tell you gentlemen, I only put $20,000 on top of Mr. Mumford, I wanted buy this new machine that would enable me to diagnose his rare disease and save others. It’s what he would have wanted”

Then the preacher said: “I have to confess, I only put $10,000 on top of Mr. Mumford. We needed that money to help more homeless,and it’s what Mr. Mumford would’ve wanted”

The insurance agent was angry at both the man, and said: “I can’t believe both of you, stealing from a dead man. I wrote Mr. Mumford a check for the full $30,000! Furthermore, I handed his wife another $10 million check from my company “

Now, here are the 7 most essential facts you should know about insurance claim. Total Permanent Disability (TPD) most likely happens to males. Only 14% of the claim are females.

Half of the Critical Illness Claimants are Younger than 45 There are 3% of dread diseases claimants aged below 25. Only 51% claims are above 45 years old. There are not merely old folks lying at the hospital beds. Superman will still get sick. Most of the claims are filed before the 10th policy year. Those are the policyholders who receive very high insurance ROI ( Return of Investment)

The total of 87 million ringgit claimed is from Great Eastern alone, and only for the period of January till March 2007. There are 16 life insurance companies in Malaysia. You know how to do the math.

I would have to dig more info to find out what happen to the other 1% that can’t get their claim within 14 days.

Cancer is the Biggest Enemy 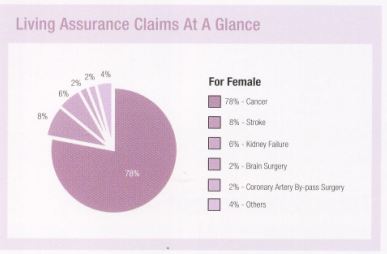 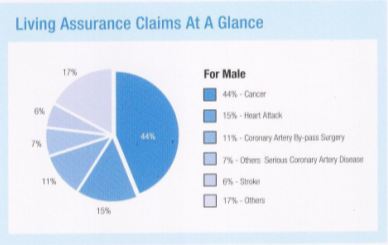 78% claim of living assurance ( a.k.a Critical Illness or Dread Disease assurance) claims is cancer for female. Are you properly insured with adequate amout of protection against diseases?

Most People are Under-insured Look at how many claims shown above are under RM100,000? Insurance agents just have to work harder to improve the statistic.

5 Things You Can Do if Your Insurance Claim is Rejected
Investment-linked, Supreme Livinâ€™ Care Plus and GMBS, Which to buy?