Colbert Low, one of the earliest Bitcoin user in Malaysia, and also the founder BitcoinMalaysia.com, shared about this digital currency and how it may affect the way you keep your money online.

Bitcoin is a protocol. Some people call it magic Internet money, some call it e-cash, but what it is, is a global payment system. It’s the best of both worlds.

Imagine going out for lunch and you decided to split the bill between ten friends. One of these friends would say, “Oh, I have a RM 100. How many of you will split it?” If you have Bitcoins on our phone, you simply have to scan a QR code and instantly pay your friend back. It’s borderless and it’s much faster because it confirms in a few minutes.

An example of Bitcoin as a global payment system is, for example, sending money to your friend in, say, South America. It’s pretty easy. Go online to a website, send some Bitcoins, and receive confirmation in about one or two minutes. Compare this to going to Maybank, for instance, a TT will take about 24 to 48 hours to clear.

Bitcoin is said to be created by someone named Satoshi Nakamoto. Some people say he’s British, some say he’s Japanese – no one’s really sure. Some people even say he’s an alien.

Bitcoins are decentralized and are peer-to-peer. I’m sure normal people are put off by these terms, but techies love them. What do these words mean?

Bitcoins are decentralized meaning, in contrast to Paypal or Western Union, Bitcoin servers are all around the world. We call these servers “Bitcoin nodes.” Anyone can install a Bitcoin Node. I can even install it on my RM 1000 laptop – Dell, or HP, or whatever and turn it in to a Bitcoin Node. These nodes are used specifically to confirm transactions and make sure that there are no fake transactions running in the system.

So, unlike Paypal, there is no central server, which makes it a really secure system. If you’re a tech guy you know that central servers can get DOS attacks, for example. This can cause you to go offline and lose business in a snap.

Let’s talk about Bitcoin and the supply of Bitcoin. You can, theoretically, reach a supply of 21 million Bitcoins. So, if you compare it to, let’s say, U.S. dollar or traditional currencies, they are not backed by gold. They came off of the system in the 70’s. This means that they can print as much money as they want.

With Bitcoin, there’s a limited supply of about 21 million. So, think of it as gold which is also limited in amount. Being limited, therefore, the value for each Bitcoin will rise and go higher on a yearly basis.

The great thing about Bitcoin is that it’s a micro-currency which you can divide in to eight decimals. So, say, you have one Bitcoin. You can divide this and add two more zeroes after the dot (.001). That is called a millibitcoin.

Say you divide the Bitcoin and add five zeroes. That becomes a microbitcoin. The smallest unit of Bitcoin is called a Satoshi. I don’t know why someone would call it Satoshi, but it sounds cool, I guess.

So, imagine, say, one Bitcoin is worth, for example, RM 1 million. Say you have some on your phone – how are you going to send it to our friend? You’re not going to send $1 million are you? What you do is you divide it.

One good thing about Bitcoin is the network fees/transaction fees. If you use Western Union, or Moneygram, or Maybank to do a TT the charges could be quite high. It could be RM 10, RM 20, or even 1%.

I have a friend in Canada who has a lumber business – timber. He sells to different people around the world. Sometimes, the bank will charge crazy fees like 1%. So, let’s say he supposedly gets $1 million in his account. The bank will charge 1%. That’s like $10,000 just for one transaction of selling/trading a ton of lumber. It’s pretty crazy. That’s the traditional payment system.

For Premium Webinar Members, you can watch the full explanation about Bitcoin, and how you can buy, sell and profit from it here: 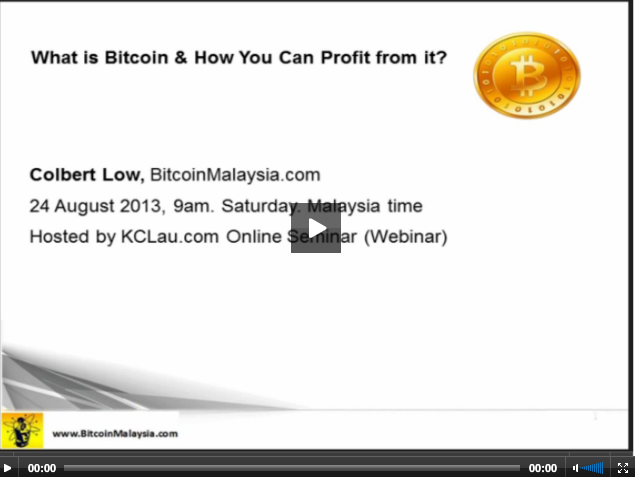