Getting medical coverage for life is not Rocket Science. As of today, a medical card will at least cover you until you’re 80 years old, and most will be until 100 years old. A hundred years may be a bit of overkill, but if you get a card that would cover until 80 years old, you should be fine.

How Long will You be Covered?

A medical card be structured or sold as a standalone medical card or as a rider. When we say, “Standalone,” this is what we also call a “Term Medical.” If you are employed by a company, for example, and with the company you have a medical coverage, that is called a “Group Term,” but it’s the same concept as a standalone. A standalone is like term insurance. You don’t pay, you don’t get coverage – as simple as that. It’s cheap for a reason.

Now, why do I want to use this malay proverb (as in the video) to present it? It’s because this is about the cost we pay for a medical card. A medical card is always on an increasing basis, it never gets cheaper only more expensive.

What’s the difference between a standalone medical card and a rider?

With an investment policy, you pay more. It costs you a minimum of about RM 1,200 annual premium.

If you buy this card as a standalone, it means that you are only paying RM 500 a year. But, as your age increase, this cost will also increase. Maybe next year it’s RM 600, or when you are 40 years old, maybe it’s RM 1,000 a year. So, you pay for what you are getting.

A lot of people find this hard to accept. Maybe when they bought their cards, their advisor or agent told them, “This is cheap, right?” After that, we think the five years, normally, the cost of this medical card increase every five years, there is one rate, the next five years, there is a different rate to pay. Then, you say, “Hey, how come it keeps on increasing?” That is how a standalone medical card is structured, and you must be prepared for that.

There is normally a scale that shows the rate for ages 41 to 45, the rate for 50, etc. So, you should be aware of this. One caveat, though, is that insurance companies have a clause that they can revise these rates any time. So, you cannot complain as it is already in the contract.

So, a standalone works like this: You pay for what is the actual cost to insure you at your age. Like I said, it’s Bersenang-senang dahulu, bersakit-sakit kemudian because when you buy this while you’re young, you pay less. As you get older, you must pay the rate that reflects your age even though you are healthy. That is just how a standalone is structured.

Still, we’re talking about the same product. The cost of this medical card is still RM 500. Where did the RM 1,500 go? For simplicity’s sake, the rest of the money that is not used to cover the RM 500 of medical cost would be channeled towards a unit trust fund that is managed by the insurance company. This is why you can’t go lower. It’s the way investment policies are designed.

That’s why you pay more per year, like RM 2,000 example, for a medical card as a rider, but the difference is it will not increase. Internally, the RM 500 cost of the medical card will increase, but you don’t feel the increase because you have already paid RM 2,000.

So, let’s say at 50 years old, the cost of your medical card is already at RM 2,500. Instead of having to pay RM 2,500 a year, you are still paying RM 2,000 because the extra RM 500 cost of the medical card has already been covered by the extra premium you paid in the previous years.

How will you decide, it is your call. Before you make any hasty decision, maybe it is wise to compare the medical cards and benefits first.

Now, a lot of people will say standalone is cheap. So, “I pay for the cheap one then I still have insurance, right? “I don’t care.” But, bear in mind that there are pros and cons with both a standalone medical card and one that is a rider.

For more details on insurance click below for our webinar. 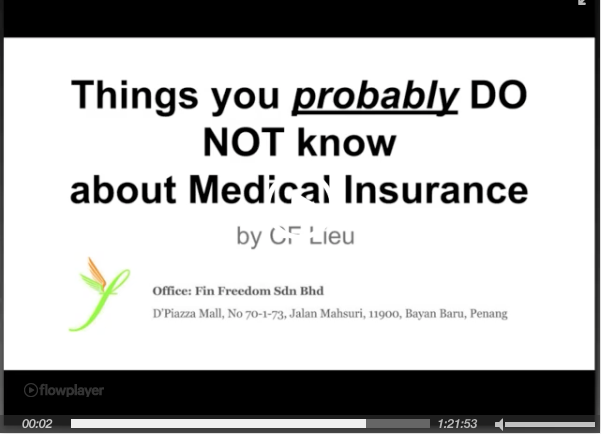 63 replies to "What You Should Know When Buying Standalone Medical Card Vs. a Rider and Make the Right Decision"