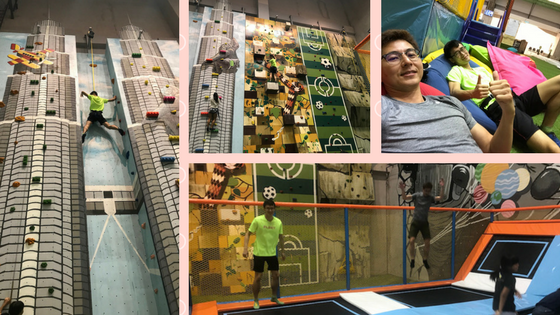 Last month, KCLau and I was invited to have an experiential climb at Rocky Basecamp. It is the first indoor climbing centre operating in Shah Alam. I was excited as my last climbing experience was several years back when I was in Genting Highlands.

It was 10 a.m. in the morning. I arrived earlier than KC as I lived closer to AEON Mall Shah Alam where Rocky Basecamp is. In a glance, the first thought I had was,

‘This stuff is for kids, man.’

Boy, how wrong I was.

As I write, I’ve already repented and come to my senses. I had my ego bruised. Indeed, it was a humbling experience for me. Here was an account of my time at Rocky Basecamp: 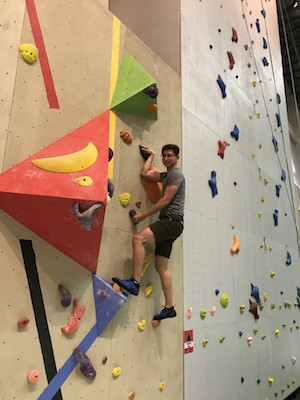 First, both KC and I were introduced to a climbing instructor. He was friendly and started to give basic instructions on how to climb.

I tried to maintain a ‘humble’ look, nodding in agreement to his instructions. Deep inside, I wanted to skip the introduction and challenge the speed climbing wall immediately. That was a bad idea as I would’ve enjoyed my climb better if I’ve taken his briefing more seriously.

Once the briefing is over, both KC and I spent a few minutes at the Traverse Wall. It is a wall built for beginners as climbers traverse from side to side. The climb is without a harness, rope or other necessary gears as the height of the Traverse Wall is low.

Soon, we moved onto the fun climbing walls. There are 4 designs available which include:

I chose to start with ‘The Football Court’ as it appeared to be kiddie. I was deceived as the climb was anything but kiddie.

At the start, it was a breeze. However, as I went higher, there were lesser blocks for me to hold onto. My body was completely stretched as the blocks were placed further apart. To make it worse, these blocks placed above were smaller in sizes. Instead of five fingers, it could only fit in three. There I was, holding onto a big portion of my body weight with three fingers each hand on two small blocks. 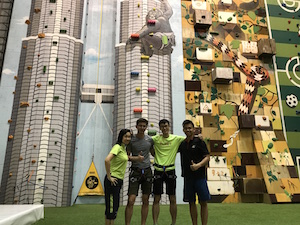 After several failed attempts, I did managed to reach the top of ‘the Football Court’. By then, I was already humbled. Thus, I’ve decided to try the ‘KLCC Wall’ as I was told that it is easier.

Yes, it was. The climb was easier as the blocks were larger in size and it was pretty straightforward. If you’re climbing for the first time, I would recommend trying out the ‘KLCC Wall’ first to build up your confidence. Needless to say, I did felt a little better after reaching the top.

As I was trying the ‘KLCC Wall’, KC was climbing the Snake & Blocks. From his facial expression, KC found it to be a challenge.

So, I’ve decided to give it a shot. The beginning was easy. However, the climb was tricky as I reached the halfway point of the wall. My body was in an awkward position as the placement of the blocks were designed to do so. I grew tired as I was contemplating on how to advance from my position towards the top. As a result, I slipped and failed to reach the top of Snake & Blocks.

I’ve decided to take a break as my fingers sored. KC was able to attempt the ‘Nature Wall’. It is the toughest among the four fun climbing walls. This is because it is built for climbers who are craving for a true ‘rock climbing’ experience as it has curves. Without proper techniques, KC failed to advance beyond the first curve. He joined me for a break as his fingers sored too.

We had a casual chat with the instructor. Generously, he shared his climbing and working experiences with Rocky Basecamp. It was a pleasure. As the sore of our fingers subsided a little, we’ve decided to challenge the speed climbing wall.

This is a must-try to complete our climbing experience at Rocky Basecamp. Measuring 15 meters in height, it is the first indoor speed climbing wall in Malaysia and Southeast Asia.

Basically, speed climbing is a race where climbers race up the 15-meter straight wall to beat each other. I was told that the best climbers can reach the top under 10 seconds. That was insane. KC was 5 meters short of reaching the top. As for myself, I gave up at the halfway point.

Rocky Basecamp has set up a trampoline for the kids to have fun.

Of course, both KC and I need no invitation to jump right in. After all, we’re still ‘kids’ and pretty youthful. We spent a few minutes to jump and bounce around the trampoline. Definitely, it felt really good!

Two Hours Later …
We had a great lunch at the cafe located within Rocky Basecamp. Food served was awesome.

All in all, both KC and I had great fun at Rocky Basecamp. Personally, I have greater reverence for Rocky Basecamp as I’ve failed to complete some of the climbing facilities available. For anyone who wants to give wall climbing a go, here are the details:

This article is contributed by Ian Tai, Founder of Bursaking.com.my and now … Bursakingwebinar.com.

guestblogger
« Previous Post Why Maybank 2 Cards for my Business and Personal Usage? Next Post » Looking For Better Loan Deals? It’s Time to Reassess Your Credit Health